i played with a ouija board in an old cottage

with a group of girls

my mom warned me:

your invitation to the dead will kindly be accepted 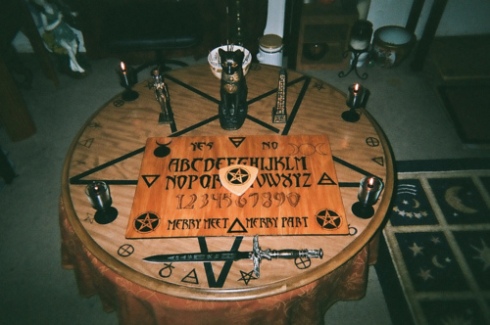 i closed my eyes

a crack in my voice produced a curious question

that my brain won’t let hover for too long

how offended they are

you must brush it

2. when your hair stands on your gangly arms

3. a movement taunting your peripheral vision

4. suddenly waking in the night — your heart thumping, afraid before your mind even is

5. the silence of the moon

6. every time you enter a basement

wandering in your path

you can call them if you want

you can wake at 3am

i sleep with my clock turned down

who are you? i don’t believe in you

but i’ll never tell you that.

am a 22 year old (wo)manchild, with an affinity for cacti and secretly recording myself singing songs by rihanna...
View all posts by glowerpower →
This entry was posted in Stories and tagged ghost, ghost stories, halloween, hallows eve, haunting, nonfiction, ouija board. Bookmark the permalink.