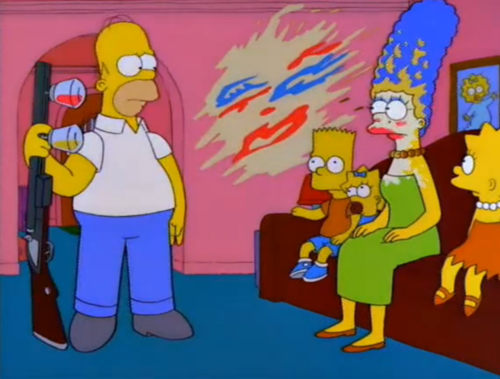 a couple months ago i came across this amazing simpsons shrine; an abundance of stills from pretty much every single episode of the good seasons (save the last fifteen), are collected in this neat little blog for you to reminisce on. some stills are even accompanied by whatever witty banter is said during the capture scene, which makes it even more appealing.

if you’re like me and spent your entire childhood watching the simpsons, but were too young to comprehend some of the jokes, this is a great way to go back and capture the full meaning of the political stabs, comments on human condition, etc, without having to watch every episode over again. for those of you who know each joke off the top of your head, it’s still an entertaining way to kick back, ignore that lingering deadline, and indulge in some eye candy.

(posts with substance soon to return: attack-of-the-essays is coming to a close)

am a 22 year old (wo)manchild, with an affinity for cacti and secretly recording myself singing songs by rihanna...
View all posts by glowerpower →
This entry was posted in Film/TV, Websites and tagged blog, cartoon, comedy, funny, humour, Photos, show, simpsons, springfield, tv. Bookmark the permalink.